Ultimate Guide to Remodeling Your Kitchen

Ultimate Guide to Remodeling Your Kitchen 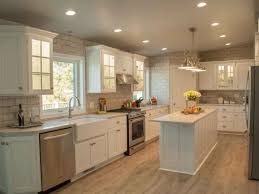 The kitchen is one of the main areas people look at when they are thinking of buying a house. A kitchen that is outdated or worn-out is usually a turn-off for potential buyers. Whether a homeowner wants to sell or not, renovating and remodeling the kitchen from time to time is important. An up-to-date kitchen is more user-friendly and more energy-efficient. Taking the time to plan a layout that makes the most of the space and to plan out the renovation lets a homeowner save both time and money.

A homeowner shouldn’t hire just anyone to remodel the kitchen. They need to choose someone who is reliable, who will stick to a budget, and who will complete the project on time. Word of mouth is often the best way to find a reliable remodeling professional. Homeowners should ask friends and family member if they can recommend anyone for the job. If a person doesn’t know anyone who has recently had a kitchen renovated, they can go online and read reviews about various contractors.

It’s a good idea to create a short list of contractors and to interview each company over the phone, and then in person. A contractor should survey the kitchen area in the home to get a scope for the project and the amount of work that needs to be completed. During the interview, a contractor should give a person a bid or estimate for the job as well as references or the contact information for past clients.

The best contractors will have the appropriate licenses and insurance. It’s essential that a homeowner confirm that the kitchen professional they have hired has the proper documentation for legal and safety reasons. There are some warning signs a homeowner should look out for when hiring a contractor. Some contractors want to be paid in cash only or demand that a person make a quick decision, which can be a sign that they aren’t operating in an ethical fashion.

After a remodel, a kitchen should be comfortable and usable. Designing and choosing the layout is an essential part of the remodeling process. An ideal layout makes use of the work triangle. Work areas, such as the sink, stove top, and mixing area, are arranged so that they each act as the point of a triangle. The cook can move from one workstation to another with ease. Usually, the distance between each work area is less than nine feet, so that a person doesn’t have to expend a lot of energy traveling through the kitchen when preparing a meal.

Sticking to Your Budget

One way a person can stick to the budget or reduce the cost of the project is to perform certain tasks themselves. For example, instead of hiring someone to paint the walls at the end of the project, the homeowner can do it themselves. They can also trim costs by choosing less expensive materials for the project. In most cases, adding an extra 10 percent to the price quoted by a contractor is a good way to avoid going over budget.

During a kitchen remodel, a lot can go wrong. One of the quickest ways to guarantee that everything will go wrong is to avoid planning the project carefully. There’s no need to rush into a renovation or remodeling project. Doing so often means a higher overall cost and a lot of regret.

Other common mistakes include choosing designs and styles based on current trends. An outdated kitchen is easy to spot, usually because it has avocado appliances and dark wood cabinets. Trendy cabinetry and countertops might seem like a good idea in the present but will be regretted in the future. Instead of investing in a trend, a homeowner might want to pick a small trendy detail that can be changed easily as tastes change.